It’s the most wonderful time of the year! That’s right, it’s Stout Season, and if you’ve been keeping up with us all these years, you know that also means it’s time for the Crew’s annual Look Back/Look Ahead Series. Not unlike Salvation Army Santas, it’s our busiest time of the year, as we scramble frantically to bring you the scoop on as many breweries as we can physically cover.

At the end of November, instead of boxing out old ladies at the Black Friday sales, I decided to side-step the shopping lines of Santa Fe’s Southside and slip into one of the city’s best local smile suppliers, Blue Corn Brewery.

My goal is simple, to catch up with the new brewing team, see how their year went, and see what they’ve got planned for 2018. Most of my articles for Blue Corn are about a new manager, or a new assistant brewer, a changing of the guard, if you will. I know the song by heart by now. Blue Corn’s been quite a revolving door since John Bullard was there, and probably even before him (If only someone had written a book detailing some of that. — S). But, I know, with fresh talent comes fresh ideas, and I wanted to get what’s flowing down the line into your glass.

With a quick smile, I told the hostess I was meeting with the brewers, and that I was going to find a place at the bar. That statement means much more to me than it does to her, I realize. I greeted my tall copper friends, as if they’re glad to have me back in house, and took my usual spot at the bar, where I always wait a few minutes before I text the brewer to let him know I’ve arrived. Nothing says, “It’s show time,” like a taster tray of new Blue Corn seasonals.

After a few minutes head brewer Paul Mallory invited me back into the dining room. He and new assistant brewer Andy Lane were kind enough to let me interrupt their lunch. There were buffalo wings on the table, and for some reason, they made me think of Chama River. (R.I.P.)

2017 was a turbulent year for Blue Corn Brewery. Docked in the Capitol City, Blue Corn may have just missed the sudden tsunami that hit poor Chama River (also owned by Santa Fe Dining), but they endured their own share of rough waters and suffered a few men overboard themselves. Yet, Blue Corn Brewery proved, once again, that with a cool-headed captain, a solid crew, and keeping to the course, they are a sturdy ship that can weather the worst of storms.

Despite the difficulties, Blue Corn had plenty of highlights to mention

One of the big changes this year was getting Andy Lane (formerly of Santa Fe Brewing) in the brewery at the busiest time of the year.

“Andy’s been a kick-ass assistant, bringing lots of ideas to the table with beer and how to change the process,” Paul said.

Lane has been waiting for a chance like this. He cut his teeth as a beer sales rep for a craft beer distributor back in Texas, his home state, getting beer to the hard-to-penetrate niche markets as well as homebrewing in his spare time. With the dream of someday opening his own brewery, he took a risk and moved to New Mexico, starting at the bottom of the industry, packaging at Santa Fe Brewing. “I just want to learn everything I can,” I remember him saying back then. You might remember him from that one episode of Vice’s Beerland that made a brief stop in our state. After his 15 minutes of fame, Lane’s doing what he loves at Blue Corn.

“To have this opportunity is exactly what I wanted,” Lane said. “It’s a dream come true.”

After a brief period of adjustment, learning each other’s style and personalities, the chemistry is good. Though Lane is newer to the process, Mallory made sure to utilize his assistant’s unique sales experience.

“He definitely helps me choose the styles,” Paul said. “I could come up with beer ideas I want to brew, all day, but as for will they sell? That’s where I get Andy to weigh in.”

As for beer this year, Blue Corn focused a lot on doing collaborations with local suppliers, sourcing everything from malts and hops, to chocolate and whiskey barrels. Blue Corn, which has had a long-standing relationship with Santa Fe Spirits, put their Imperial Chocolate Porter in a Colkegan Whiskey Barrel to great success. They’d also done a really hoppy collaboration with Del Cielo Brewing Co. from Martinez, Calif., likely a connection Mallory made during his time brewing by the bay.

Mallory’s favorite beer in 2017 was an easy drinking Oktoberfest, which they were able to lager for a later release in the season. As it turned out, folks only complain when the Oktoberfest is released too early, if they complain at all. The beer showcased a malt sourced from nearby Proximity Malt’s Colorado location.

In ‘17, Blue Corn was not a bit shy with trying new things. One such beer was a Honey Ginger Braggot, which was one of Lane’s favorites to work on. He said,

“It was unusual, heavily drinkable, a perfect kind of crowd-pleaser,” Lane said.

It was their last collaboration with Chama River, as it turned out.

Speaking of which, it was not all smooth sailing for the Santa Fe Dining Fleet, with that one particular heavy-medaled flagship sinking into the history pages of Stoutmeister’s book. There was a change on the wind, says I, and for some, it blew harder than others.

“We’ve had a lot of turnover,” Mallory said, soberly. “And, I think we just do our best to keep this ship afloat. And, I think we’ve done a really good job with that. Hopefully no one up front noticed. We kept the beer flowing, and kept the beer tasting good.”

Gathering from the jubilant crowd that I had left back in the bar area, I would say they’ve done just that.

In 2018, the Blue Corn staff promised that their famous (Brew Crew Approved) beer dinners will continue. They aren’t sure what will happen as of yet with the uncertainty of the new chef hire, but a change in the guard has never set Blue Corn back before.

Unfortunately, there aren’t any expansion plans in the works. They said they definitely want more fermenters, and perhaps a grain silo. I can think of one that’s just sitting there off of I-25, probably still filled, floor-to-tip, with 2 Row.

I asked if there was any word on Chama River, but Mallory’s lips were shut tighter than a mermaid’s non-disclosure agreement.

As for beers in 2018, BCB may be planning to do a Smash Pale Ale, with Single Malt, And Seven Hops. That counts in my book. Blue Corn’s Russian Imperial Stout is currently in the tank, a beast of the abyss, just waiting to surface.

Something probably only Santa Feans know on the regular is that Blue Corn gets its hands on a barrel every now and then, and certainly fills it with something worth driving 40 minutes or taking the Rail Runner to try. The staff is looking at putting some of their Imperial Stout in the barrel and aging it a bit. Blue Corn isn’t rushing to barrel-age anything and everything at the moment. The staff is not looking to sour anything for the sake of souring, either.

“We’re going to try to keep it small, make sure we do it right,” Mallory said. “Because I think a lot of breweries, especially smaller breweries, run before they can walk. And, that’s not what we want to do. We want to keep them nice and clean. We want to do a few of them and do them right.”

One of the very few they’ve been working on was a saison brewed last year, which should be ready any day now. (Farmhouse Funkalicious is now on tap. — S) They gave it a pinch of sour cherries and a dash of sour ale, to give it just a little bit of tartness, Mallory said. They did a little bit of blending and gave it a good amount of time on the brettanomyces.

I asked both Lane and Mallory what upcoming project most excites them for 2018.

Lane: “I think a little bit of everything. (Laughs) For me, getting to the point where I’m more involved with the recipe writing and stuff like that and actually creating beers. That’s what I’m excited for.”

Mallory: “I want to keep up the collaborations, build up on what we started last year. Then, one of our first beers will be a Mexican Lager. It usually calls for rice or corn to lighten up the body. We’re going to do locally sourced blue corn, to keep with the farm-to-table attitude of the restaurant. We also want to build on some of the relationships we’ve made in the past year with the chocolate and coffee makers. We look forward to getting the beer dinners up and running and tap into the local community with more events. And, people should expect to see us at more local beer events as well.”

Mallory’s parting words: “I think a lot of people have their mind made up about Blue Corn Brewery, because we’ve been around for 20 years. I think they should come by and check it out. If you’re a fan, or not a fan, I say come by and see what we’re working on. I guarantee, it’s different than last time.”

I say farewell to my friends for now. As soon as they were finished, they caught up to me at Rowley Farmhouse Ales to sample some of the darkest barrel-aged beers ever arrayed on tap in one location, a black hole of beers with a gravitational pull too strong for any of us to resist. This year for Thanksgiving, among family and friends, I was thankful for New Mexico’s beer scene and the strong community surrounding it. To you and your health, my friends, cheers! 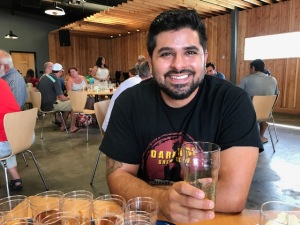