Denver is a city of liquid dreams and harsh mornings. From all over the country, much of the beer industry flies or drives into town for the annual Great American Beer Festival, a week-long bout of beer tasting and bonding, followed by an immense awards ceremony, a culmination that becomes the true test of one’s mettle. And, there’s medals, too.

GABF 2018 has come and gone, and once again there hasn’t been so many disappointed bearded folk since Smaug moved into the Lonely Mountain. I kid, though. Honestly, win or lose, there are few such ginormous gatherings that bring the brewing industry together like this one.

At the end of the weekend, however, what you take away from GABF is truly up to you, well, and the 293 judges in attendance. Was it that woman you met? The memories you (may or may not have) made with your bearded and pink-booted buds? Or, was it that all-important recognition of taking home a medal in one of the 102 categories? 2,404 breweries entered 8,496 beers in the competition this year. Not all were going to return home victorious, but our state did as well we’ve done in the past with seven medal wins.

Stoutmeister, our fearless editor, whose own mettle rivals Thorin Oakenshield himself, already caught up with a few of our other medalists in the midst of the mile-high festival, there at the mountains of madness. But, now that we’ve all made it safely back to land of enchanted beers, and all of the Crew is accounted for, even me, with livers and fancy Bierstadt glassware intact, it was high time we got back to business as usual and catch up with the rest of our New Mexico winners to find out what it’s like to bring home those shiny coveted awards.

Since Santa Fe is my hometown and turf, I caught up with silver medalist, Rowley Farmhouse Ales, a brewery that just celebrated its second year in the business.

In the small but friendly taproom, head brewer Wes Burbank and brewmaster John Rowley joined me for a sampling of one of their yet-untapped creations.

Though it’s a first GABF win for Rowley Farmhouse Ales, these guys are no strangers to beer competitions or medals. For Burbank, it’s his eighth GABF medal with a brewery, having worked with the likes of Backcountry, Crooked Stave, Dry Dock, and Left Hand to name a few, but this was his first fist bump from Papazian. For John, it’s certainly not his first GABF rodeo either, just the first medal he got to bring home with him. Yet, for their plentiful past experience, this GABF was special to both.

“I gotta say it feels pretty good,” Rowley said. “We were sitting there, waiting for our name to be called. All the breweries were there. You’re kind of getting disappointed because you’re not hearing your name, category after category. I was actually kind of looking at my phone at that point. Then, when I heard Germophile, I said, ‘Fuck yeah!’”

And, if it’s not currently under his pillow right now, I’ll eat my hat. I will eat my hat, sir!

“We had all of our (tasting) glasses on the floor,” Burbank said. “When I heard them say our beer, I accidentally kicked one of those little plastic glasses halfway across the hall!”

The RFA crew celebrated here and there with other breweries and beer friends while working three events that day at Hops and Pie, Falling Rock, and Goed Zuur. It wasn’t until after, that they really processed the win.

“When I was finally alone, after all the celebrating, I lost it,” Burbank said. “It all hit me, what we did, how hard we worked. I was overwhelmed. It was a great feeling.”

“By that point in the night we were pretty torched,” Rowley added.

As previously mentioned, Rowley had won competitions for his beers before but not quite like this. He had won a medal at the National Homebrew Competition, and many local awards.

“It’s not the same,” Rowley said. “This is such a greater magnitude. This is definitely another level.”

Homebrew competitions are still important. Homebrewing is where many of us start that journey towards brewery ownership and GABF awards. It has been that way for so many in our industry. Speaking of which, The Santa Fe Open homebrew competition is coming up soon.

“Go to santafeopen.org. It’s coming up the weekend of November 8, but you have to get your entries in now. There’s posters all over the place, in most of the breweries and Southwest Grape & Grain. If you want your beer to be evaluated by a reasonably good group of judges, and I know they’ll have some certified National Judges, this is your thing,” Rowley said.

Germophile won silver in the Berliner-style Weisse category. It had 115 entries.

“Berliner Weisse is a very simple style of beer,” Burbank said. “Which is why I couldn’t be more proud that we won with this one, because this beer is all about execution. Pretty much every Berliner Weisse is the same recipe with different tweaks here and there. It’s just a super wheat beer that’s soured. Ours is 50-percent wheat, 50-percent pilsner. It’s super easy.”

With sour beers there’s a lot of sliding on that quality and flavor scale, but it comes down to how the brewery controls that slide that makes the beer successful.

“I think our process is dialed in,” Rowley said.

“The only thing I really tweak with it is water profile, to see if I can make it just a little bit better,” Burbank added.

It was just the second batch of Germophile made by Rowley Farmhouse Ales, and Burbank’s first batch.

I asked the guys, out of all the beers they’d sent in to be judged at GABF, which beer would they want to win for?

“This is one of the first times I can say there’s nothing I could have done better with this beer. For me, as a brewer, this is the best one for me, because it’s not about exotic ingredients or how many hops you can stuff into a keg. It’s a very simple beer, and it’s just down to execution,” Burbank said.

For next year, Rowley assured me they’re just going to keep on brewing, and brewing more Berliner Weisse, for sure.

I would like to congratulate the entire crew at Rowley Farmhouse Ales on their Silver Medal win and all of our other winners this year at the Great American Beer Festival. As always, I can’t wait to see how everyone does next year. To all the brewers in New Mexico making amazing beers, to continuing to challenge yourselves, your equipment, and our palates, we raise up the glassware! 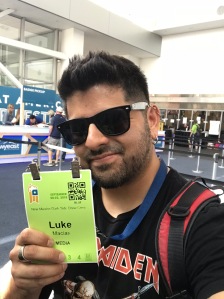