Seeing as how it had been a while, last summer to be exact, that anyone from the Crew visited Beer Creek Brewing, I headed out to the charming little stop on Highway 14 to catch up with co-owner Rich Headley on a recent rainy afternoon.

Rich was his usual boisterous self when I arrived an hour before regular opening hours. He certainly has reasons to be in a good mood, not the least of which was the arrival of the 5-barrel brewhouse and full equipment in recent weeks (brought up from Arizona during one of our recent snowstorms, no less). Up until now, Beer Creek has lived off a beer-and-wine license, though the staff has collaborated on three beers with other area breweries, all of which are currently on tap.

Before tasting those, Rich offered me a tour, since a lot had changed since Franz Solo and I visited long ago, shortly after Rich and his partners had taken over the property.

Our first stop was the patio, which is booming in the warming months, Rich said.

“We made this (outdoor) bar,” he said. “It really turned out to be the life of the party in the summer. Seventy-five percent of the sales in this building come off this bar. That tap handle setup is the original Wolf Canyon tap handle setup from their patio 23 years ago.”

Wolf Canyon, for those who do not know New Mexico beer history, was an ambitious brewpub off I-25 in a building that is today The Bridge at Santa Fe Brewing. It was run by Brad Kraus, a former SFBC head brewer who had come from the first Rio Bravo Brewery and Restaurant in downtown Albuquerque (which has no connection to the current Rio Bravo Brewing). Ultimately, Wolf Canyon did not survive, and SFBC took over the property, but retained much of the old equipment. Rich said he found the tap station while visiting with SFBC owner Brian Lock, whom Rich also said has been a huge help to Beer Creek from the beginning.

We took a quick trip through the beautifully renovated interior of the restaurant, which has definitely retained its Old West charm. After popping into the kitchen to indulge in the aromas coming from the pizza oven, he took me outside, where construction is still apace to build things outward to the east. It will eventually be walled in and become part of the building, with a much larger bar area with many more taps than their smaller bar setup can currently handle.

“We’re going to get this dishwashing station out of (the existing kitchen),” Rich said. “We’re expanding this part of the building out to about here. … This is all getting enclosed. This is where we’re putting the bar. The smoker is going on the other side of the wall. It will be connected to that section of the building. This will have a nice, high ceiling. All the taps go in this wall. We have a walk-in cooler going on this side of the new dishwashing station for all our kegs. We’re going to serve package here, (but) we don’t really intend on canning (our own beer). … We’re not looking to get crazy.”

After heading around that area of construction, we made it to the brewery, which is in the back (south) end of the building. A new concrete slab is being poured outside, which will serve as the base for the glycol chiller, air compressor, CO2, and even some fermenters. The extra space will help because the small brewery room is, well, small.

“We had the option to build an extra building for our brewery, but the expense would have been ridiculous,” Rich said. “The permitting aspects were horrible.”

With a very short ceiling height, Rich said all of the brewing equipment was custom made. It was still a challenge to get all of the equipment inside, and nothing has been fully hooked up yet, but it is all just a matter of time until brewer Jami Nordby and Rich can start trying out the system.

“We’re going all electric because propane is very expensive,” Rich said. “Ryan (McArdle, co-owner) and I were both solar guys. We just got these in place yesterday morning. This is our hot liquor tank. This is my mash tun and we have a lauter tun that my friend Andrew is going to convert to a whirlpool kettle. We’re using a lot of whole hops more than the other breweries. Every one of the beers you’re going to taste use whole hops.”

“This is a 5-barrel bright tank that’s going to end up in the walk-in cooler, so we can transfer out of here right into the walk-in cooler as a serving vessel,” Rich said, pointing to the other equipment. “Then we have a 10-barrel bright tank, it was fun getting in these in here. We’ve got about 25 barrels of storage as far as that’s concerned and 15 barrels of fermentation. We have a 12-by-12 (foot) walk-in.”

With the wind starting to howl and the rain approaching, we went inside so I could get a taste of all three collaboration beers, plus a delicious pizza called The Rancher (which is a meat lovers, naturally, with The Farmer being the all-veggie pie).

“We have three (collaboration) beers right now,” Rich said. “We intend on continuing the relationship and having those beers being created by the other breweries even after we start (brewing).

“What we made first is Coming Soon Pale Ale, from Tumbleroot Brewery, we did it with them. That has a really nice hop profile. We used Mosaic in the boil. Then we used Columbus and Cascade, mostly Columbus and Chinook in the dry hop. It was a pretty heavy dry hop, but it’s not super hoppy. It finishes beautiful. We have a higher malt profile, which we like.”

Coming Soon definitely had the nose of a hoppier beer, but the actual flavor was sweet and flowery, like one would expect from a Mosaic pale. It is certainly going to be a popular beer out on the patio.

“The second one we did was with Red Door, and that’s been received really well,” Rich said. “We called it Picture Rock Porter, because the little butte you passed coming here was originally called Picture Rock.”

Rich and the ownership team at Beer Creek are also owners of the Crossed Sabers Hop Farm to the south, and he said that they helped another hop farm open in La Cienega. The first batches of whole hops from that farm were used in Picture Rock, which is a delightful, old-school porter, with a strong mouthfeel and just enough smokiness that will delight, but not overpower, your palate. Basically, if you really miss State Pen Porter, let this beer be its successor to the local porter throne.

“And then, we did this collaboration with Blue Corn not too long ago, and we did a hazy IPA (called Santa Faze) and we used just Citra,” Rich said. “We bought four pounds of whole Citra hops and used 22 pounds of pelletized hops that we got from Santa Fe Brewing Company.”

Though the Santa Faze did not stay all that hazy in appearance, it still has the juicy flavor you would expect from that style.

I enjoyed all three beers, and the pizza was monstrous but exceptionally good (half came home for a future lunch). The dining area filled up fast for lunch, and there were even more pies heading out as to-go orders.

If the collaborations are any indication, Beer Creek should be cranking out some quality brews soon in one of the more unique and enjoyable locations around. It is only a few miles from Santa Fe Brewing to 3810 NM 14, so the drive should not be an obstacle to anyone who wishes to make the journey from the capital or from Albuquerque (you can also take the entire Turquoise Trail north from Tijeras, if you wish). Just remember to come hungry and thirsty.

As soon as Beer Creek has its first made-on-site beers on tap, we will let everyone know. Until then, enjoy the collaborations, the guest taps, and the charming hospitality of the staff.

Here are a few more photos of the interior for all to enjoy. 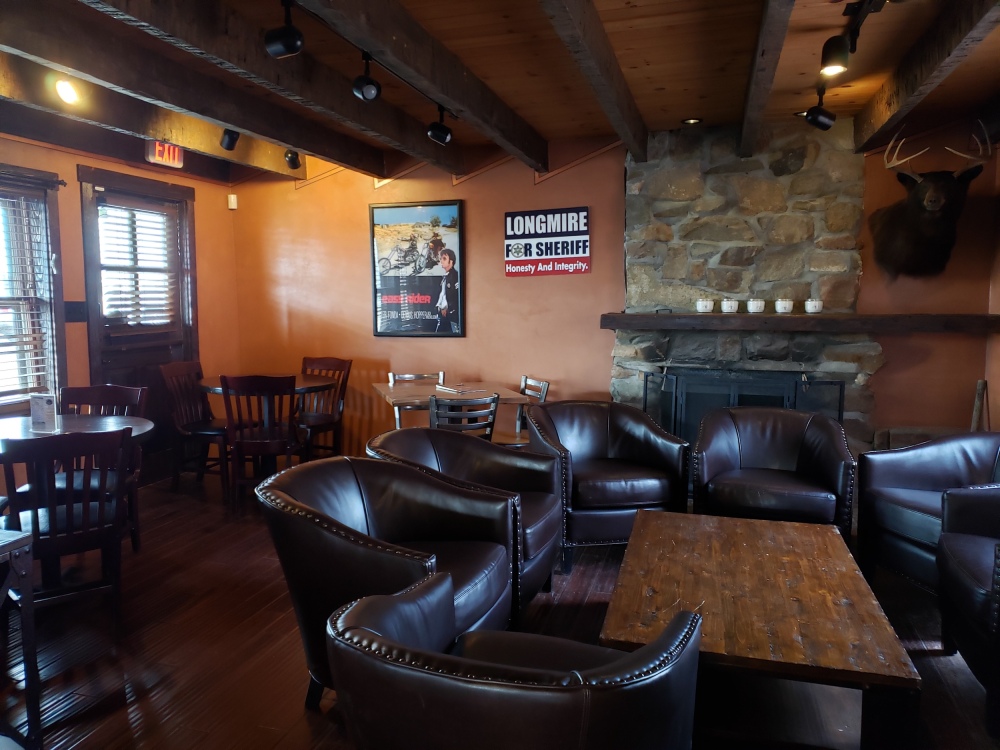 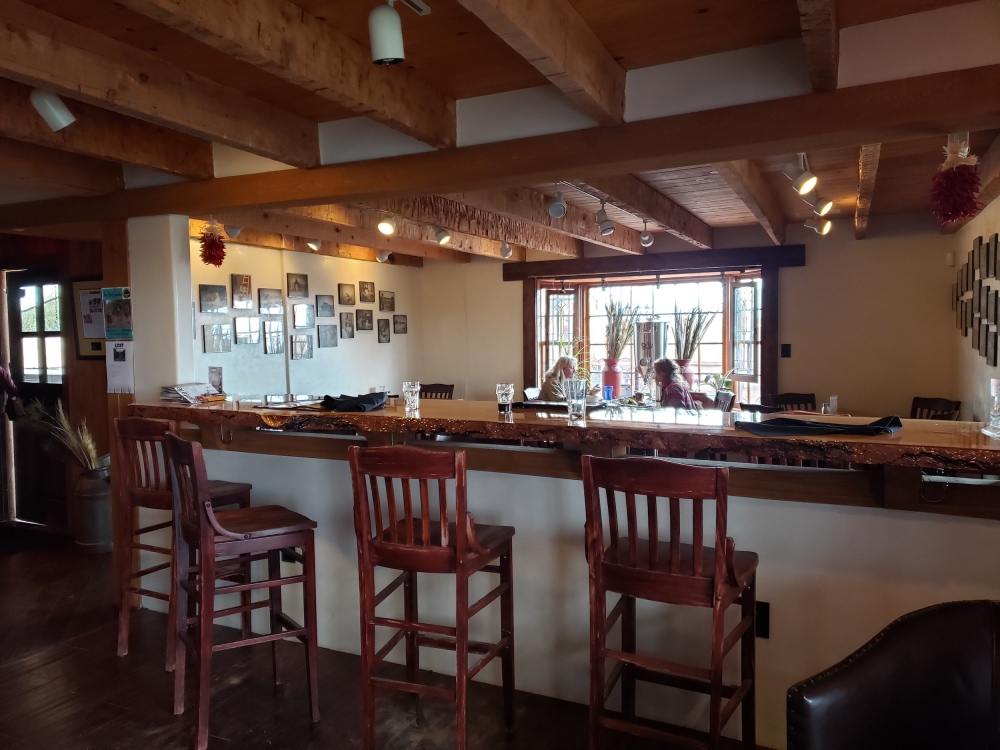 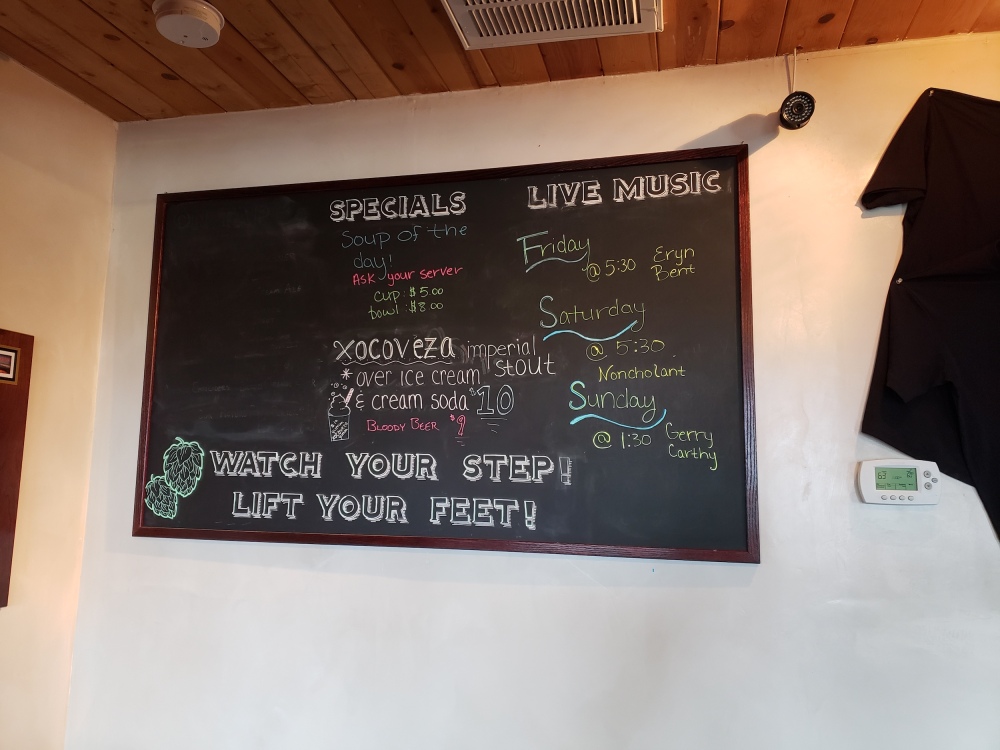 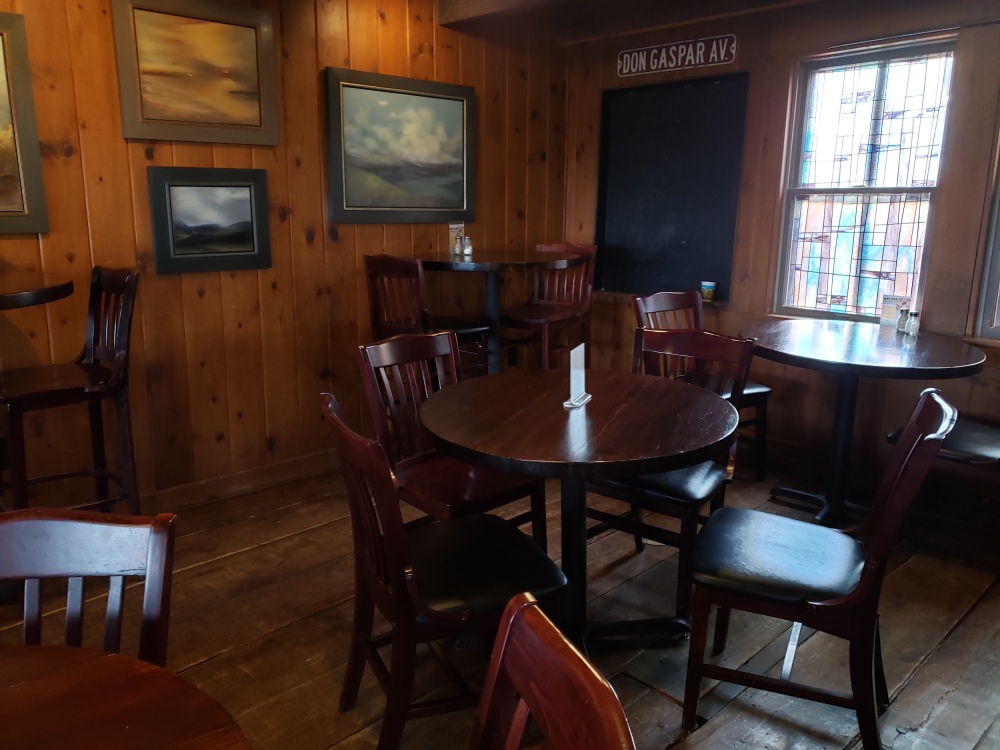 A big thanks to Rich for the tour, interview, beers, and pizza.